Stephen Jesse Jackson is a former American basketball player who played 14 seasons in the National Basketball Association(NBA) and is one of the most competent players on the team. He was a part of a number of clubs like Indian Pacers, Milwaukee Bucks, New Jersey Nets, Charlotte Bobcats, Golden State Warriors, San Antonio Spurs and Los Angeles Clippers.

In 2003, the player won an NBA Championship with the San Antonio Spurs.

Stephen Jackson has always been against ‘Systemic Racism’ and he in fact stayed in the frontline in the protests for his friend, George Floyd’s murder. He was active throughout the movement to find justice for Floyd who was murdered by a Minneapolis police officer. Stephen was completely wretched because of his friend’s death and supported him and his family in this tough time. 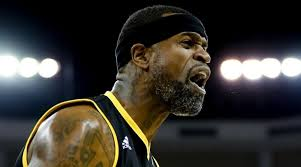 Despite him being against racism, the player spoke in favor of the American football player, DeSean Jackson who made very controversial and hurtful comments on the Jewish community.

He made a disconcerted video in support of DeSean on Tuesday, that completely blemished his own reputation in people’s eyes.

In his video, he conveyed a message that DeSean is right and that the ‘Black people’ and stop ‘White Jews’ from wrecking the whole world.

The former player said that the people who think that DeSean hates the Jewish community and thinks wrong or bad of them, have completely misinterpreted his statement and that he didn’t mean it that way which he made clear in his video later on and apologized to everyone.

Eagles confronted the player right away for his disrespectful comments and warned him to make a public apology or he will be responsible for the consequences. His statement offended the Eagles owner Jeffrey Lurie and general manager Howie Roseman who are themselves Jews.

The player was correctly convicted for his hurtful comments he made, and as he was given a second chance, Eagles expect him to use it in a right way and spread the message of love, solidarity, and equality through his social media rather than using it to spread hateful comments.

STEPHEN CALLED OUT THE NFL OWNERS:

However, Stephen interprets the whole situation differently and has a whole other perspective of it. He fully supports DeSean saying that he was not wrong and didn’t mean whatever he said.

Further on, the player called out the NFL owners on their silence on George Floyd’s killing that clearly shows racism. While calling out the NFL owners, the player further quoted that the person who massacred 6 Million Jews in a catastrophe should not be defended and people are right to make such statements about him.

Jackson went live on Instagram and addressed his followers saying that he knows that everyone’s upset and disappointed in him because he didn’t quite say what they wanted to hear. Despite all the anger, he wouldn’t support the wrong group.

In his video, Jackson talks about Jewish people having complete control over the Federal Reserve. He also mentioned ‘Rothschild’ and how they own all the banks.

Jackson is in a rage because of how Eagles never spoke about Floyd’s death who he became friends with very fast and people often called him Floyd’s twin. He was extremely against racism and now sadly, he himself is supporting it and making such comments on the whole situation.