The arrival of Bronco Family

The Bronco family has finally taken an upturn. They are back with an amazing blending of nostalgia, technology, customization, and functional design by Ford.  After almost 24 years, Ford is back with Ford Bronco 2021. Ford resuscitating the highly developed Bronco 2021 in an ostentatious disclosing run, last Monday on ABC, ESPN and National Geographic.

Every video clip shows a different member of the Bronco Family. One has Bronco 2-Door, the other has Bronco 4-Door and some have Bronco Sport.

Ford’s Flagship Series, revealed something Spectacular in the form of Bronco Family. Bronco is the next generation Brand, having a perfect blend of new technologies, digital functioning, and much more. One of the most amazing features of Bronco Family is it has the ability to mapping its way and sharing all those activities and experiences performed by the Bronco Family to others via an app.

The first member of the bronco Family introduced in 1966, which was a two-door off-roader. It was one of the best discoveries at that time. Now another member came out having powerful ancient qualities with new digital changes that enhance Bronco 2021.

All three new members that come to Bronco Family also have qualities of ancient DNA embedded in them, that increase its demand out there.

The third member of Bronco Family is Bronco Sport, has smaller in size as compared to others and also very comfortable to use. It is specially designed to drive off-road and also is capable of driving on the highway and streets as well.

Releasing of Bronco 2 and Bronco 4 will start from the year 2021. And they have already started taking reservations also with giving the advantage of over $100 to their customers. They will launch their first model next spring.  One member of the Bronco family, Bronco Sport is going to reach the dealership at the end of this year. All these three members will be constructed at the Michigan Assembly Plant in Wayne, Michigan.

There are a lot of hidden things related to Bronco 2, Bronco 4, and Bronco Sport, related to their Basics. Firstly we are going to discuss its basis and then we will move toward its interesting themes including nostalgia, design, customization, and technology.

Basis of Bronco 2 and Bronco 4

Both models have outer steel covering with prominent front suspension. Both have major aims to enhance Control. The main focus is on its Gear, its gear has solid-axle design feature, fitting five locating links to provide complete control off-road and strength. The models come with two possible engines;

While no estimation on gas mileage.

These vehicles are available in

Ford made Bronco with much advantages, which you may need in your daily life, including

Besides all this, Ford designers added something more to be just on the safer side. They added modular steel bumpers, some steel body to protect their outer surfaces, engines, and fuel tanks.

Ford made an amazing innovation by making tires 35-inch off-road available in Bronco 2 and Bronco 4.

Bronco sport is something different from Bronco 2 and Bronco 4. It would be used casually on a daily basis by any common person on highways and on-off streets anywhere you want to go on such a small budget. You can easily take advantage of this as it is kind of a small packet with many advantages.

The Bronco Sport has two main engines, you can use it according to the trim.

Bronco sport also has paddle shifters with Steering wheels. This Bronco Sport has a big Spaced back in which we can adjust around 2 motorbikes in it. It also has an ability to lift up their gate glass. It has five trim levels,

Ford designed Bronco 2021, having a mixture of old technology from 1966 with the new need for the future generation. It enhances the overall Bronco Family with highly developed Auto machines.

While making bronco Family at another level, ford never fails us to remember ancient bronco in it. Ford uses new technologies while having qualities of that old Bronco.  It reminds us of that Bronco that was discovered in 1966.  Ford is going to sell its new edition of bronco while making the old bronco its base. And this would be an amazing strategy to gain profit in all this.

The 2021 Bronco is very fabulous and designed on the basis of new needs but when you look at its exterior, you will surely miss out on the old Bronco while seeing this new bronco.

The Bronco 2 and Bronco 4 have these qualities that made it perfect for off-roading also.

Here comes the best thing about 2021 bronco. Ford has set up various ways to customize the Bronco 2 and Bronco 4 and even Bronco Sport.

They offered almost seven different versions of Bronco 2 and Bronco 4, based on their color and trim combination. You have also an opportunity to choose a color from the eleven different colors they provide. There would be a limited edition on the launch of Bronco 2021 with a price of almost $35,000. But their ranges will fluctuate according to the trim levels and other options.  The Bronco producers have almost 200 accessories in their factories.

Bronco 2 and bronco 4 come up with different numbers of roof systems.

Bronco 4 has an option to remove its roof by unlocking from the interior. The models are also available in the soft or hard roof or with the option of both.

The doors of bronco 2 and bronco 4 have an ability to remove. These doors are designed frameless so that you find no problem while removing it. Bronco 4 has much space to board all four doors in its backspace.

All these opportunities will be according to its price. The highest rate of this would be almost below $60,000.

The main focus of technology is on a four-wheel-drive system, the most favorite thing of the brand’s so-called Terrain Management System.

Ford is offering all Bronco models with a base setup and an advanced system.  The base system uses two-speed electronic shifts on the fly transfer case. It also has an available auto mode that enables the driver to select 2H or 4H.

Bronco 2 and bronco 4 have almost 7 modes to choose while driving off-road,

The other main technology, bronco 2 and bronco 4 come up with the option of mapping their trails and also could be shared with others via the app, either online or offline. It has also an amazing LCD option in it, with 360-degree coverage. It will be helpful for the driver to point out other vehicles without any hurdles.

Ford also added some attachment points to the front where you can place your phone, or other devices you are using during the drive. 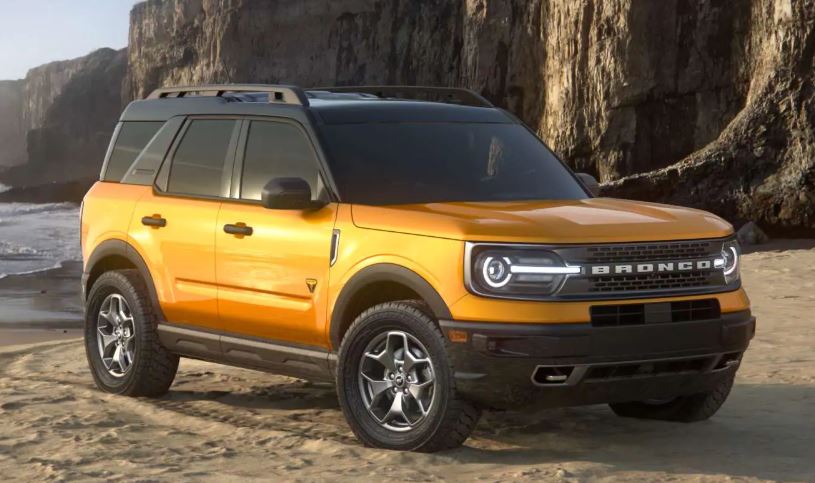 The most notable thing about any vehicle is its design. The Automakers of Bronco 2 and bronco 4 have made its design so graceful. It has a trial sight on the front so that you can determine any type of canoes before facing any damage. It also has amazing floor settings.

“You can swap them out or bolt-on extra lights or Go Pros,” Wrath said. And especially if you are shorter, you can simply use them to tell you where the corner of the truck is, which just goes to show that innovation does not always need a microchip.”