Wall Street recently reported that Tesla is boosting its prices by 24% in the coming year. The shares increased as much as 11%, which marks $1,342 to an all-time. The prices of Tesla were boosted up to 24% after the JMP security analyst, Joe Osha, increased his price up to $1,500, to a Wall Street.

The company is likely to have huge growth in income, which is expected to be $100 Billion, by the year 2025. This became one of the few reasons to boost up the prices and shares. The sudden increase in the JMP took place when Tesla reported second-quarter deliveries that were more than the expected number, which was about 70,300, while they made up to 90,650 deliveries according to a report. 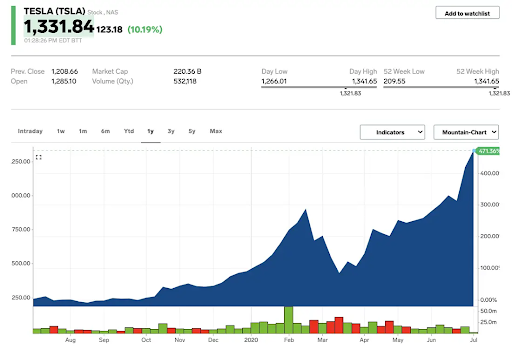 If Tesla can manage to deliver such an impressive unit, which was over 90K, then TLSA is competent enough to be shipping 130K to 140K units a quarter by the end of this year and that they have to achieve a target of shipping 757K units in 2021.

Moreover, Osha predicted that the growth of Tesla would reach up to $100 Billion by the year 2025. Which would be a huge deal for them.

Tesla is said to be one of the biggest companies which were found in the year 2003 by the two American businessmen, Martin Eberhard and Marc Tarpenning, and the company was named after Nikola Tesla who invented the Serbian American.

The main goal of the company was to make electric motor cars. The CEO of the Tesla company was Martin Eberhard, and Marc Tarpenning was the acting CFO of the company. The company was founded and sponsored by the co-founder of PayPal, Elon Musk, who funded up to $30 million to the company to achieve its target and became the chairman of Tesla in 2004.

In the year 2008, Tesla motor launched its first car, Roadster. That had a mileage of 245 miles(394 km), in the first go, the performance of the vehicle was noted to be extraordinary. Its motor was powered by lithium-ion cells that are typically used in computer batteries. The cost of this fancy vehicle was set up to $109,000, which was exclusive of the tax.

In 2007, both the CEO(Eberhard) and CFO(Tarpenning) left the company but remained the shareholders. Elon Musk then took over as a CEO and president of the company.

The company also launched a number of solar energy equipment, which were used to store electrical power from solar energy, to use in homes and offices. This equipment was launched in 2015. In 2016 Tesla launched its solar panel company, named ‘SolarCity’, that was changed to ‘Tesla’ in the year 2017.

In the ongoing year, Elon Musk made a statement about making Tesla a private company and that the funding has been secured. Which later on turned out to be a fraud for which he was charged by the Securities and Exchange Commission(SEC).