Real Madrid, the famous football club, was founded on 6 March 1902. It was basically a Spanish football club that was based in Madrid. Real Madrid became popular and was recognized as a FIFA club in 2000.

The club had over 66 victories in total, out of which 34 were the La Liga titles. It’s one of the most competent and famous clubs due to its amazing players and unbeatable performances.

Florentino Pérez Rodríguez, a Spanish businessman, former politician, and a successful civil engineer is the President of the Real Madrid football club. And the team players are trained and coached by Zinedine Zidane, who is a former French football player.

On Thursday 16 July, Real Madrid once again proved to be the best team by beating Villarreal by 2-1 and succeeded in achieving the La Liga title again for the 34th time.

The match took place in the suburbs of Madrid at Alfredo di Stefano stadium in the burning hot weather. The team gave a striking performance under the assistance of their hardworking coach, Zidane. The team has been consistently giving a spectacular performance and won the current game like they won 10 games in a row previously, because of Zidane’s flawless coaching and dedication towards the team. Because of their back to back victories, people often say that Zidane has some sort of magic spell that makes them perform so well every single time.

Before the match, Zidane stayed extremely in training the players to make their performance flawless. He didn’t let himself get distracted by anything because he was dedicated to achieving his goal of winning the trophy one more time.

On Thursday night, before the Villarreal game, the coach said in a press conference, “I don’t have to think about if we draw tomorrow, or on Sunday. Tomorrow, we will be going all out to win the game, as we do in every game”. He sounded pretty confident about winning the title this time as well.

Zidane, a french former footballer is himself a serial winner and this is the 11th time Madrid won the title under his coaching. He has always focused on winning and losing for him is the biggest fear and failure. This was the reason he left Real Madrid in 2018. He couldn’t deal with Real Madrid losing to Leganés in Copa del Rey, after working so hard on building their reputation. In 2018, after the failure, Zidane said that ‘it is a lot easier to win the Champions League than winning the league itself and that he firmly believes in this fact’.

LA LIGA PUT ON HOLD DUE TO ONGOING PANDEMIC, COVID-19:

The whole football activities were suspended due to the spread of deadly Coronavirus, which was very sad news for the fans and the football community itself. But this didn’t hold back Real Madrid from planning its next win. They were focused to beat Barcelona this time, for which they kept practicing and plotting. Madrid didn’t let the last failure get in their way of winning the title for the 34th time. They left a victory mark for the 10th time in a row on Thursday. 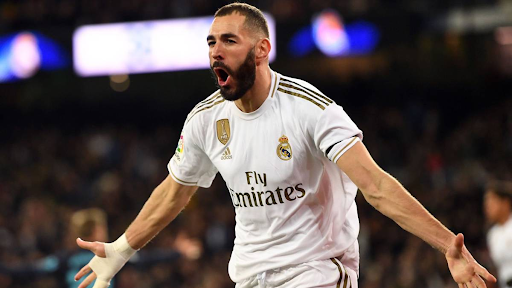 Karim Benzema who is one of the best players and top scorer of Real Madrid once again closed the game with a victory. He scored the toughest penalty goal when Casemiro took over Sofian Chakla pass and passed it over to Benzema who then successfully scored a goal despite all the hurdles created by the opposing team.

Barcelona failed to win this one because of Zidane’s unbeatable coaching and the team’s flawless and dedicated performance.

The team won once again because of their amazing performances and thoughtful strategies. Due to their fearless performance, they managed to build up pressure on the opposing team and as a result of the pressure they failed to perform well and Real Madrid once again stood victorious.

The team celebrated their victory afterward in happiness and the coach is now looking forward to winning even more trophies in the future.