LEBANON EXPLOSION; RESCUE SERVICES ARE STILL UNDERWAY DAYS AFTER THE...

Rescue teams in Beirut are still searching the wreckage on Beirut’s port for bodies on Friday; almost three days after the tremendous explosion hit the Port at Lebanon’s capital, Beirut.

The massive explosion recklessly demolished everything in a parameter of 5 kilometers, sending shockwave miles away. The explosion was even felt in the neighboring country, Cyprus. The catastrophic event left 150 people dead and thousands injured; along with thousands of people who lost their homes.

At Least 4 more bodies have been recovered from the rubble, raising the death toll to 149. The gigantic blast tore up the large grain storehouse, destroying several buildings near the port. The city blocks left with a mess of shattered glass and rubble.

Moreover, French and Russian teams with trained dogs were also searching in the port area on Friday. This happens roughly a day after the French President Emanuel Macron paid a visit to the site, promising the aid and affirming the press for reforms by Lebanon’s deep-seated political leaders.

The Lebanese government has launched an investigation to look into the causes of the attack after the criticism against the government surged up. Many Lebanese are blaming that the government is responsible for the destructive explosion due to its carelessness and corruption.

WHAT CAUSED THE MASSIVE EXPLOSION?

The explosion was allegedly erupted by the ignition of 2750 tons of ammonium nitrate, a chemical used in fertilizers and explosives. It has been present at the port since 2013 after it was seized from an expropriate cargo ship.

RESCUE SERVICES AT THE DEMOLISHED PORT 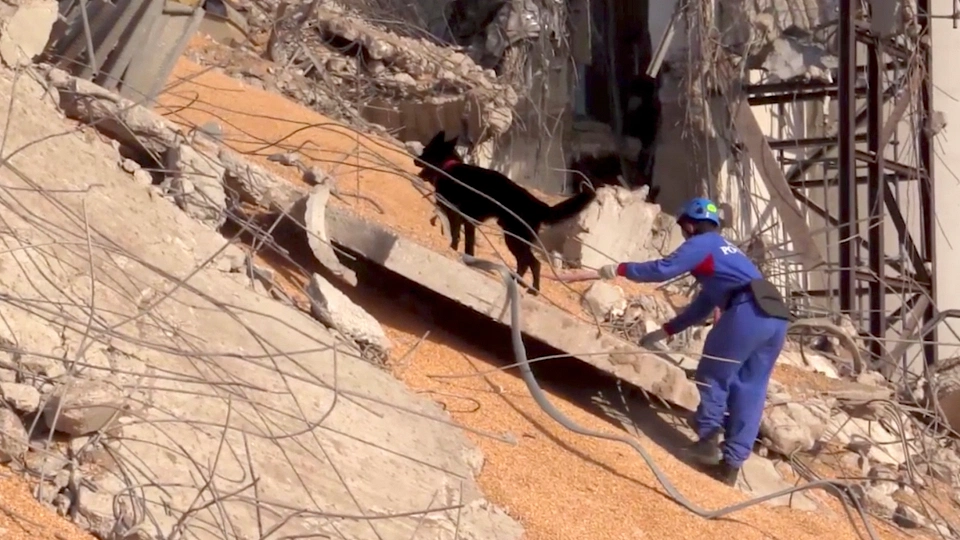 Several countries sent their rescue and search teams to find the survivors beneath the wreckage. Among those who have been found is Joe Akiki, a 23-year-old port worker who has been missing since the explosion.

Col Tissier, the head of the mission said that French rescuers which comprise a team of 55 members also found four bodies; they started work on Thursday.

Lebanese firefighters are also searching at the destroyed port, where bulldozers and excavators are beating the rubble. Dozens of people are still missing, and their relatives are waiting with hope in their eyes that they will be found.

LONG-TERM IMPACT OF THE EXPLOSIVE

Around 300000 people, which make up 12 percent of Beirut’s total population; are not able to return to their homes because of the explosion. The massive blast blew out the windows and doors across the city and left many buildings unfit to live in.

The estimated loss due to the explosion is $12 billion to $15 billion. The world leaders also expressed their grief about the incident. Hospitals are also damaged and experiencing a hard time tackling the wounded as they are already overburdened due to coronavirus pandemic.

Currently, the investigation is focusing on the port and customs officials, with almost 16 employers apprehended and many others being questioned. But people believe it has a bigger picture, with the corruption penetrating in the political framework and stretching to the top of Political leadership.

Lebanon has been ruled by similar political leaders for decades; many of them are former warlords and military commanders from 1975 to 1990 civil war. The ruling elites are using public organizations to gather money and distribute funds to their supporters.

Almost thirty years after the Lebanon civil war, the situation still does not get better. There is an electricity shortage, waste and debris are not collected and tap water is not drinkable; imposing harm for the public’s health.

Even before the catastrophic explosion, the country was already sinking in the economic crisis. The political leadership is blamed for taking the country to the edge of destruction. Unemployment was mounting up; surging up to 70 percent in recent years. The local currency slumped and wiped out many people’s savings.

This explosion will not only affect the people of Lebanon and its economy for a short period; the impact would be long-lasting. With the economic crisis already mounting up before the blast; it will make the task of rebuilding even more challenging.