The Hot Couple: Joe Jonas And Sophie Turner Welcome Their...

Joseph Adam Jonas, an American singer, actor, and songwriter was born on August 15, 1989, in Casa Grande, Arizona. Joe’s father, Paul Kevin Jonas, is also a musician, songwriter, and a former minister at the Assemblies of God church. His mother is a former American Sign Language (ASL) teacher and a singer.

Jonas has two brothers, Kevin and Nick, who are also very popular in Hollywood. The three brothers have a band of their own called the Jonas Brothers. All three of them gained popularity due to this band and they became the heartthrob of people especially of the teenagers.

The band gave a number of big hit albums like It’s About Time (2006). Their second album was self-titled, which was released in 2007 and turned out to be their biggest hit. Jonas also starred in a Disney movie, Camp Rock and its sequel, Camp Rock: The Final Jam, alongside his two brothers. They also did a Disney drama, Jonas Brothers.

English actress, Sophie Turner was born in Northampton, on February 21, 1996. Her father, Andrew works for a pallet distributing company while her mother Sally is a nursery school teacher.

She gained popularity from her character in the famous TV series, Game of Thrones, in which she played the role of Sansa Stark. Due to her outstanding performance, she was nominated for Outstanding Supporting Actress in a Drama Series by Primetime Emmy Award.

The hot couple started dating four years ago, in 2016. Sophie is 24 and Joe is 30. They got introduced to each other by some of their common friends and met up at a local bar in Camden, UK, for the first time along with some other friends.

The actress said that after their first meeting they started exchanging messages on Instagram and other social media apps. This is when they fell for each other and started dating. Later on, they were seen going out together to dinners and clubs.

Sophie posted a picture with Joe on her Instagram in 2017, without a confirming caption but sure enough after this post, the rumors about the two datings came true.

It was officially confirmed that they are in a relationship, by his younger brother Nick when the two of them were seen attending Met Gala 2017 together. After that, they made many public appearances and finally announced their engagement on an Instagram post in 2017.

The couple dated for four long years and finally got married at a surprise wedding ceremony in Vegas on May 1, 2019. It was a two ceremony wedding. 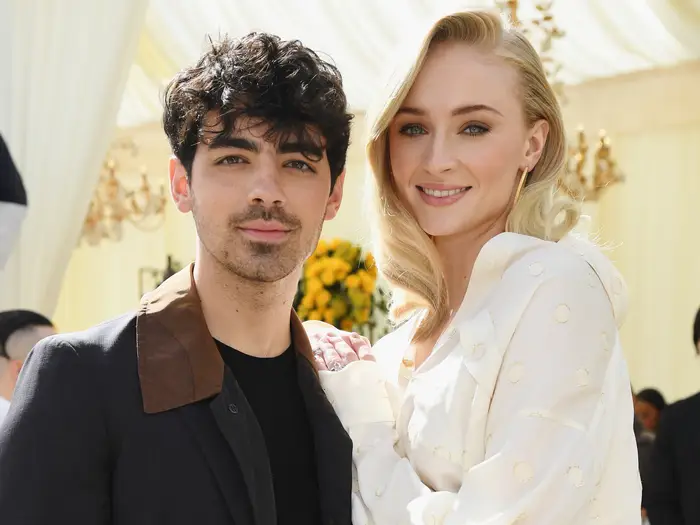 Joe and Sophie announced the arrival of their first child recently in 2020. They haven’t posted anything on their social media accounts yet so the news was confirmed by Turner’s representative to CNN.

There are no further details given by the family but the news about the beautiful couple being blessed with their first child is true. They got married last year in Vegas and are now parents of a beautiful healthy baby. Nothing more has been revealed about the baby yet.

Fans are impatiently waiting for the couple to reveal their baby’s gender and also are also very excited to see the picture of the baby.