WASHINGTON NFL TEAM; DERRIUS GUICE RELEASED AFTER BEING ARRESTED ON...

Washington’s NFL team is once again making rounds in the news. This time, it is due to running back Derius Guice who got arrested on Friday on the account of domestic violence charges. The Washington Football Team was quick to sever ties with the 23-year-old star after the allegations.

Loudoun County Sheriff Office’s spokesperson Kraig Troxell made a statement that Derius Guice surrendered himself on Friday evening after 5 pm. He was snapped being handcuffed in the parking facility before officials took him inside. He was released from custody on a $10000 bond after 7 pm and was seen driving away.

Guice faces three counts of assault, one count of strangulation and one count of destruction of property, considered a violation in Virginia. The charges came from three domestic-related incidents that happened at Guice’s home in Ashburn, Virginia, respectively on Feb 14, March 13, and April 27.

According to the department, the Police were made aware of assaults initially in Montgomery County, Maryland where the victims reside. The incident was later investigated in collaboration with the Loudoun County Sheriff’s office and made aware of the allegations on July 22.

The Washington NFL football team promptly released him from the team in less than two hours after the arrest, at around 5 pm.

“On Thursday we learned of a potential domestic violence-related incident involving RB Derrius Guice. We immediately alerted the National Football League and have continued to work with them during this process. We subsequently met with Derrius to inform him that he was excused from all team activities pending a review of this matter. This afternoon we learned that there were multiple charges filed against Derrius. Upon review of the nature of these charges and following internal discussions, we have decided to release Derrius immediately.” 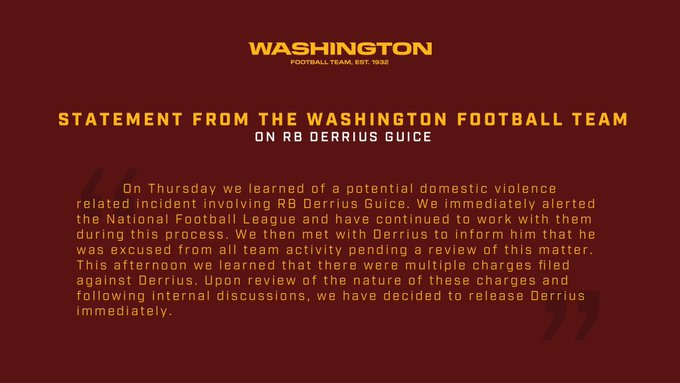 Guise’s arrest and release occurred three weeks after the report came out; in which 15 former female employers and 2 female reporters alleged that they were sexually harassed and verbally abused by high-ranking officials in the team.

The team fired two scouting executives following the report. The play-by-play broadcaster Larry Michael also announced his retirement; he was termed in the report. Head coach Ron Rivera made a statement that he is introducing a “revolutionized culture” within the team. He stated;

“We are hoping that people evaluate us in which direction we are and in which way we are going, not on what we have been. We will follow the policies and have an open-door policy with no penalty. My daughters work for the team, and I am sure as hell will not allow any type of misconduct.”

The team was in contact with the NFL throughout the investigation. Derrius Guice would ultimately face discipline under his personal conduct policy. The NFL generally suspends players for six games on domestic violence charges, but it seems like some penalties can be harsh, some can be lighter.

Attorney Peter Greenspun, from Greenspun Shapiro PC law; will fight the Guice’s case. When requested for a comment, he said his client adamantly denies the charges and will defend the charges in the court.

“On August 7, 2020, the Loudoun Province Sheriff’s Office acquired capture warrants for Derrius Guice. Shockingly, the specialists didn’t look for an announcement or any contribution from Derrius before the warrants were given. The inability to completely explore charges of occasions, which purportedly occurred months prior, is peculiar. In view of the affirmation of these unconfirmed charges, the Washington Football Crew delivered Derrius, additionally with no request concerning what did or didn’t happen.

Derrius has continued to work exceedingly hard to contribute to the Washington Football Team and was expected to be a top player this season, yet he was released without a single question as to what happened. Derrius will defend these charges in the court now, where a full vetting of the allegations will take place, in contrast to actions by local law enforcement and the Washington Football Team that assumed the worst, directly is contradicting every sense of fairness and due process.”

DERRIUS GUICE; A FOOTBALL RUNNING BACK 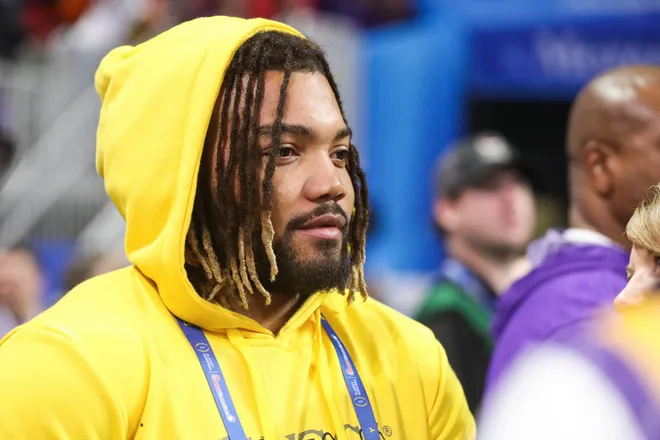 Darius Guice was selected by Washington in the second round of the 2018 NFL draft after he was dropped out of the first round on the questions of being immature and young. At that time, the team thought they hit a jackpot. But the player struggled throughout his career due to various injuries.

His accomplished career got disturbed when he sustained an anterior cruciate ligament injury of the left knee in the preseason and missed the entire 2018 season. Guice recovered and took part in 2019’s season opener at Philadelphia. He tore the meniscus in his right knee and was forced to miss the next eight games.

He returned again in November and played in a four-week-stretch that included rushing 10 times for 129 yards and two touchdowns in a 29-21 victory at Carolina. Darius Guice injured his medial collateral ligament in his left knee on December 8 and got out of the entire season as a safeguard.

Apart from a player, people were fascinated by his play and his twitter feed; on which he provided details about his comeback amid injuries and also offered his fans to play video games with him. Derrius Guice deleted his Instagram, and Twitter account after he was accused of domestic violence, reportedly on Friday.

Guice has also been in a troubled and hard Childhood, which includes the tragedy of his father, Derrick Keith Guice’s murder in 2013; who was shot to death in a restaurant after an argument with another man. Though he was destined to return to the game this year and appeared fit at Washington’s training camps, he was having clashes with the playing time.

Apart from  Adrian Peterson, who was signed by the team after Guice’s injury in 2018, Guice was also set to battle with newcomers Peyton Barber, J.D. McKissic, and Antonio Gibson as well as Bryce Love, who is a 2019 draft pick; he missed last season because of a torn ACL.

The story is still developing, and it is timid at this time how these allegations would affect Derrius Guice’s football career who predicted to have a breakout in the 2020 season.