Anushka Sharma is a glamorous actor and producer of India. She mostly works in Hindi films and has been enjoying a renowned career. She is also known as the most famous and highest-paid actress in India. Because of her marvelous acting and devotion, she has received many Filmfare awards.

Because of her fame as the highest-paid actress, she has appeared many times in Forbes India’s Celebrity 100 since 2012. Moreover, she has been featured by Forbes Asia magazine in its 30 Under 30 list of 2018.

Anushka is native to India by her birth. She was born on the 1st of May, 1988 in Ayodhya, Utter Pradesh, India. Her age is about 32 years now. She entered into the world of action through her first debut in modeling and later on she attempted to show herself in Bollywood films. By occupation, she is both an actor and producer. She has been active since the year 2007 and still acting as a producer of various films, produced by her own firm “Clean State Films”.

In her siblings, there is her elder brother, Karnesh Sharma who is a film producer now but had served in the Merchant Navy before. Anushka Sharma had always shown her gratitude to belonging to a Military brat. She said that being a part of a Military family had an important role in shaping her as a person and all the more contributing to her life.

Being interviewed by ‘The Times of India’ in 2012, she replied “I feel proud in saying that I am an army officer’s daughter even more than being an actor”.

She lived in Bangalore by her childhood and got admitted to an Army School there. Later on, she received a degree in arts from Mount Carmel College. 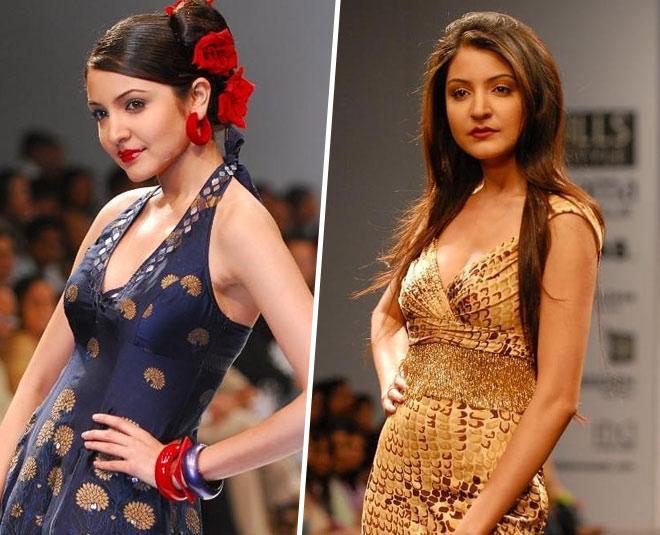 Anushka Sharma; walking on the ramp as a model

At first, she had no intention of adapting acting as her career but later on, she did. She wanted to go with modeling and journalism but not acting and she also confirmed that.  After the completion of her graduation, she went to Mumbai to grow her modeling career further.

She secured her enrollment at the Elite Model Management and was brushed by the stylist Prasad Bidapa.  She signed her first modeling assignment with fashion designer Wendell Rodricks in 2007. She was also selected as his finale model at the Spring Summer, 2007 collection.

She has also promoted many brands since then and drove campaigns for brands like Silk & Shine, Whisper, Nathella Jewelry, and Fiat Polio.

She said about acting relating to her, “I think I was born to act and emote. I would walk down the ramp and smile they used to say, ‘give us a blank look of your face’. It was a great difficulty, not to smile”. During modeling, she was inclined towards acting and attended an acting school with taking auditions for film roles.

She came to acting in 2008 by playing the role of Taani Sahni in the highly successful romantic film, Rab Ne Bana Di Jodi. It was her first debut in case of acting opposite to King of Action World, Shah Rukh Khan. After that, she had many proposals from the producers and directors.

Going with all that, she earned her place in the Public’s hearts by starring in Yash Raj Films’ romances Band Baja Barat in 2010 and Jab Tak Hai Jan (2012). She received the Filmfare award for the best-supporting actress for her aspiring filmmaker role in Jab Tak Hai Jan.

Her superior releases with the leading roles came with the sports drama Sultan (2016), and Rajkumar Hirani’s religious satire PK (2014), and Bipoic Sanju (2018). PK movie earned global fame with its story and conveyed a message. Critically hit by many Indian critics, PK emerged as the talk of the town and highest-grossing Bollywood films with global revenue of $98 million U.S Dollars.

Anushka Sharma had a love relationship with Indian National team cricketer Virat Kohli but the actress was reluctant to talk about it in Media.  The relationship of both celebrities was at the mouth of a substantial number of people not only in India but all over the world. The couple later on happily married to each other in Italy on 11 December 2017.

The total net worth of Anushka Sharma is estimated to be 35 Million Dollars in 2020. She started her career as a model but now is working as a mainstream Bollywood actress. Most of his income comes from the endorsement of Various Brands and personal investment. She also earned by acting as a producer for some films.

Anushka Sharma is such a woman that consumes her money mostly in social causes and gives charity and donations to NGO’s generously. She has been supporting various charities and social causes including “Gender Equality” and “Animal Rights”.

To put in a nutshell, Anushka Sharma is a renowned and respected Bollywood actress because of his conduct and style. She has been a model, actor, and currently acting as a producer for the films of “Clean State Films”. She had a relationship with Virat Kohli and later married him in Italy (2017).

Besides a great actor, she had been a great human being. She supports many NGOs and social organizations by giving large donations. Currently, she is not on screen but playing his utmost role as a producer off the screen and benefiting us from her talent.