Angelina Jolie is a famous American actress, filmmaker, and humanitarian. More precisely you can say the most beautiful and attractive woman of America she is. She has been the receiver of numerous accolades, including an Academy Award, and three Golden Globe Awards. Many times, she had listed as the Highest-paid actresses of America.

The Basic Information about Angelina Jolie!

She was born on the 4th of June, 1975, and is now 45 years old but still a beauty despite her growing age. Her birthplace is Los Angeles City, California U.S. The name of Jolie’s father is Jon Voight and Marcheline Bertrand is her mother. She is currently holding the citizenship of the United States, Cambodia.

She has been active in the action world from 1982 till present. She has married three times in her life but currently again divorced by Brad Pitt in 2019. Her first husband was Jonny Lee Miller whom she married in 1996 and then separated in 1999. Angelina Jolie again got married to Billy Bob Thornton in 2000 and left him in 2003. Her recent husband was Brad Pitt whom she married in 2014 and was divorced third time in 2019. She had about 6 children together with Pitt, three of whom were adopted internationally.

Jolie has joined the action industry even from her childhood with her father Jon Voight in Lookin’ to get out (1982). A decade later to this, there is the beginning of her film career with the low-budget production Cyborg 2 in 1993 and then followed by her leading role in Hackers (1995). She made huge fame in the critically applauded biographical cable films George Wallace in 1997 and Gia (1998).

She had also won an Academy Award for Best Supporting Actress for her performance in the drama, Girl Interrupted in 1999. Angelina Jolie has also starred as the Video game heroine Lara Croft in Lara Croft: Tomb Raider (2001). Her role as a video game Heroine established her as a leading actress of Hollywood.

After that, she continued to work in many Hollywood classics and lead her career by starring in Mr. & Mrs. Smith (2005), Wanted (2008), and Salt (2010). She also received a great applaud for her performances in the Dramas, A Mighty Heart (2007) and Changeling (2008). Her performance in these dramas let her earn a nomination for an Academy Award for Best Actress.

The biggest production of her career bringing her commercial success is the fantasy Picture Maleficent (2010). Later in 2010, Jolie widened her career into directing, screenwriting, and producing with the War Dramas, In the Land of Blood and Honey (2011), Unbroken (2014), and First They Killed My Father (2017).

Jolie as a Humanitarian! 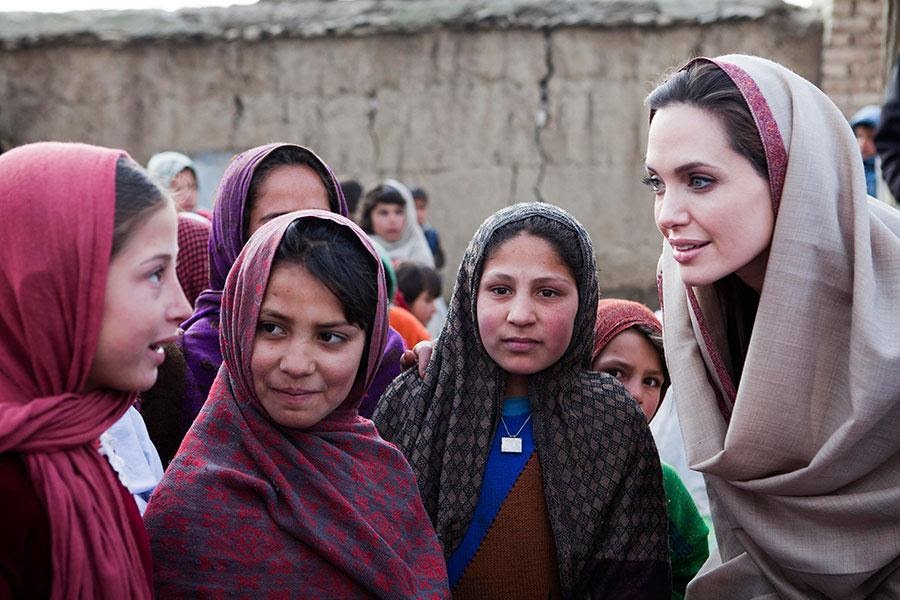 Other than acting, Jolie is also known for her humanitarian efforts, for that she has received the Jean Hersholt Humanitarian Award. Moreover, she also made an honorary Dame Commander of the Order of St. Michael and St George (DCMG) among other honors. She aids in promoting many causes such as conservation, education, and women’s rights. She is exclusively acclaimed for approving on behalf of refugees as a Special Envoy for the United Nations High Commissioner for Refugees (UNHCR).

Angelina Jolie is the daughter of Jon Voight and Marcheline Bertrand who had also ‘acting’ as their profession. She has a brother named James Haven. The godparents of Jolie are actors Jacqueline Bisset and Maximilian Schell. Jolie’s parents got separated in 1976 and after that, she used to live with her mother. Her mother left acting because of her ambition for raising her children. Jolie used to watch movies at home with her mother. Instead of her father’s profession, this thing intrigued her to adopt acting as her career. As a child at age 5, she had a chance to work in Voight’s lookin’ to Get Out (1982).

At age 6, her mother and her live-in partner moved the family to Palisades, New York. After their return back to Los Angeles, Jolie decided to act and took admission in Lee Strasberg Theatre Institute. She got trained there for about two years and appeared in various stage productions.

She first got into Beverly Hills High School where she didn’t get settled and was teased by the other children for being thin, wearing glasses and Braces. She was then transferred to Moreno High School, where she turned to be a “Punk Outsider”. As she grew up, she went through changing circumstances and various stages of her life. She tended to use drugs at the age of 20, you can say every possible drug specifically heroin.

Jolie’s relationship with her father was always deteriorated. Even she strived and petitioned the court to legally remove her surname as Voight and the command of change name was granted on 12 September 2002.

Jolie had a cancer prevention treatment!

Both her mother and grandmother died of ovarian cancer. To prevent breast cancer, Angelina Jolie had a preventive double mastectomy (the removal of breasts) on February 16, 2013. After that operation, the chances of her developing breast cancer reduced to 5%.  After two years in March 2015, she had a 50% chance of developing ovarian cancer. For that purpose, she preferred to remove the ovaries.

Once in her tweet, she said about her womanhood and surgeries “On a personal note, I don’t feel any less of a woman. I feel empowered and confident that I made a strong choice that in no way diminishes my femininity”.

Jolie has been mentioned as the Voluptuous and attractive woman of the world by many media brands. Several Media outlets such as Vogue, People and Vanity Fair have nominated as the World’s most beautiful woman and the brands including Esquire, FHM, and Empire have mentioned her as the most luscious woman alive. The most noticeable thing about her is the tattoos made on her body one of them the most recognizable is the Latin proverb quod me nutrit me destruit (“what nourishes me destroys me”).

To put in a nutshell, Angelina Jolie is a great American actress, producer, and Humanitarian especially promoting women’s rights and health. She is found actively against sexual abuse and is involved in many campaigns against it. She has been regarded as the World’s most beautiful and voluptuous woman because of her curvaceous figure. She had and still having a great acting career despite her growing age. She had many obstructions in her life from her Parents’ side special father and also health-wise but this thing didn’t put her back. Even she came out with a new passion to serve humanity so that no other woman suffers what she did.